Work on the next version of Robosapien Dance Machine, version 3, is going extremely well. The current publicly available version only works with the original Robosapien. Version 3 will work with the Roboraptor, Robopet, and Robosapien V2 robots.

Robosapien Dance Machine is my free open source program that lets you use a Windows PC to control you WowWee robot. The user friendly graphical drag and drop interface makes it easy to create fun powerful scripts that make your robot dance and act in funny perfomances that you design. Robosapien Dance Machine's two other most notable features are the ability to command your robot using just your voice, instead of using the complex remote control, and to instantly share scripts with other users via a script bank; either scripts you created or scripts created by others.

If you have questions, visit the Evosapien forum and look for the Robosapien Dance Machine section.


P.S. - I don't have the Roboraptor in the video because his great big scaly green butt wouldn't fit in the shot (or on the table)! (Sorry Fluffy!)

permanent link to this entry posted by roschler @ 9:24 PM 0 comments 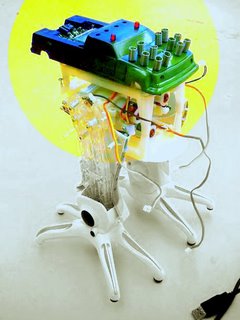 WHAT DO YOU DO WITH A RAPTOR WHEN YOU HAVE TO GET IT BACK TOGETHER FROM THIS?
You vist the hackraptor system pages for an understanding of where it all goes and how it works...
then you scream and shout and throw it all in the bin and buy a roboreptile...
only kidding, when you finish ripping it apart why not turn it in to a monster truck power walker...i did !
goto www.hackraptor.twistedsouls.com
to see it now (click systems page)
or goto the forums and leave questions for the team to anwser


permanent link to this entry posted by sprocket2cog @ 3:33 AM 0 comments