Although not directly related to the Robosapien RS Media, I found the recent announcement from Fisher Price regarding their upcoming Elmo Live toy robot (animatronic) interesting. Elmo Live can wave his arms, stand, sit, bend his knees, and tell jokes or stories. I can't wait to make a video with my Robosapien RS Media robot as Elmosapien doing a skit with Elmo Live. You can be sure I'll be getting one as soon as they are available! For my fellow hackers, there is no word yet on whether or not Elmo Live is programmable or can be readily hacked. The biggest question at this time is whether or not you can create your own animations with him or add your own sounds.

Robosapien RS Media for less than $149!

It looks like the holiday nuttiness is happening again just like last year. Buy.com is letting the Robosapien RS Media robot go for a $149 while quantities last. This robot cost over $400 when I got mine. It is the same robot I created the Elmosapien and Vadersapien custom personalities for. Each personality has hundreds of custom sound files in them. Note a personality is a different set of custom sound and voice files and existing user defined scripts. It's not a new A.I. or anything like that.
The personality software can be daunting for a novice user, but even without the software it's one hell of a robot that comes complete with 4 different built-in personalities. If you get one, be sure to get the two custom personalities I mention above since they're free and of excellent quality (IMHO). Elmosapien got covered by pretty much every major gadget web site there is including: Engadget, Gizmodo, C|Net, etc. Ok, I'm bragging here but you can watch the video that went viral at the bottom of this post.
Click here to visit Buy.com now. 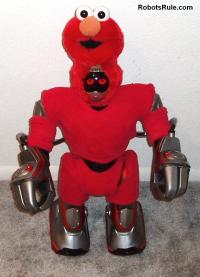 Wal-Mart now has the Robosapien RS Media for sale. I've been having great fun with mine for the last few months, which I got overseas. In other news WowWee and Sun, Inc. are working out the kinks in getting a full fledged Java programming language SDK running on the Robosapien RS Media for the hard core programmer types out there. If you've been waiting to pick one up now's the time.

In any case, it's a great little robot and if you'd like to see what a high quality custom personality sounds like, you can go to my Vadersapien page and listen to a sample of the a custom personality that sounds like Darth Vader's little brother; which I made for my Robosapien RS Media. If you already have an RS Media, or if you get one of these talented little bots later, you can download the entire Vadersapien personality and use it yourself for free. You can read about it's features and see a video of it on my Robosapien RS Media page.

Here's a newer video done by a WowWee staff member where they show you some of the robot's features and talk a little about the included software editing suite:

Just a quick update post to let you know that Sun has produced a Java SDK for the Robosapien RS Media. This would allow you to write Java programs that run natively on the RS Media. There still getting some wrinkles ironed out, and the RS Media is still not available in many places, but I'll keep you updated as things unfold.

South Nottingham College has a course for its' ICT students that uses the Robosapien RS Media to teach robotics: