When Roboquad came out in New Zealand I couldn't wait to hack it, So I replaced the front,back and side entertainment leds to ultra bright blue and yellow inserted a blue LED mouth and changed the over all appearance of Roboquad.

Here is a neat little Robot by JR Scientific, I did some small mods to make this J2R Robot a little better, Hope you like it.


Here is a link [above] to my interview with Eric Brandt of Robocommunity.

Those of you that are currently Robosapien V2 owners, please leave your responses using the blog's comment system. I would like to know from you how frequently you still play with your Robosapien V2? What is your favorite feature? What would you like to see improved? Finally, are you planning on getting a Robosapien RS Media?

Hello fellow WowWee robotics hobbyists, I come to you, to let you know about the latest 'modification' I have done. I have modified RS Media personality, to be, Bender, from Futurama, if you dont remember him, maybe this picture will remind you.

I have been working on this bender mod, for a few weeks, downloading/importing audio from season episodes of Futurama from and so far I have come up with 24 different sounds, and 7 bodycon's as well as 2 macro's of what bender does best ;-) drink beer, and well party!

Visit this site to check out the latest updates, and download's

Sunday, December 10, 2006. Sharper Image is selling the Robosapien V2 for an absolutely absurdly low price in this one day sale. They are selling the Robosapien V2 for $89 USD while supplies last (USA residents only). These are apparently brand new units that you can get extended warranties on too, which is a good idea since it's such a complex product. I paid over $250 USD for mine which is the current list price, and the best I've seen on the street are the occasional but hard to find sales for $159 USD with the average price being $200 USD. The sale is just for today but that is one hell of a price.

Many of you have written me and asked what is a great gift for the holidays? I'm biased of course, being the happy owner of a Robosapien V2

, I would recommend that as a gift especially since Amazon has them for only $159 (USD). But there is another robotics gift that I would like to highlight because it is terrific.

The Lego Mindstorms NXT robotics kit is the successor to the best selling Mindstorms 1.0 and 2.0 kits. It's got a brand new processor, a host of new fun sensors and parts, and one of the best learning environments that anyone could ever want. If you want to get a pre-assembled ready to play robot that only needs batteries, then get the Robosapien V2. On the other hand, if you feel you have an aspiring robot builder on your hands that wants to build lots of different kinds of robots without having to grab a power saw and a lathe, then get the Lego Mindstorms NXT robotics kit.

HOT NEWS: The Discovery Channel's online store has created a mindstorms nxt coupon to save a nice fat $20 off your Lego Mindstorms NXT purchase. When you go to the the Discovery Store and order a kit, make sure you use the coupon code 99Robo to get your $20 discount. Visit the Discovery Store now. This is one of their top selling items and you don't want to get caught empty handed if it becomes hard to get like the Tickle Me Elmo TMX doll is now.

The reports of the improvements to the Robosapien V2's vision system accuracy after adding a head mounted LED continue to roll in.

For those of you that don't do major surgery on your Robosapien V2, EvoSapien expert Robotech has created a robot friendly Robosapien V2 LED hack that does not require any invasive drilling or cutting. However, you do need to do some minor soldering and open the head; therefore technically you are voiding your warranty. But compared to hardcore alteration of the robot's body this is relatively mild. Of course, you can still do serious damage if you short or solder the wrong wires or melt something in your robot.

Use at your own risk and be aware that WowWee won't like it! 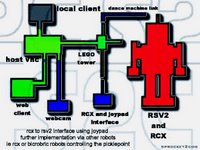 Well its been a while since I wrote anything about the V2 so I thought what better way to start then to talk about possible interfacing with other robots and devices.
roschler sparked some idea`s after a late night email trail, and the resault is a more complete picture of how I plan to work with the v2 and other robots.