Hello everyone. Shiftcomm, Ugobe's public relations firm, was kind enough to send me three new photos of Pleo. What's great about these photos is you can now get a good feeling for what Pleo's skin is going to look at.

Note: When you click on the photo, it will open a new window that shows you the photo full size. Some browsers will show you a magnifying glass which you should click to see the skin maximum size and up close. It's a real treat! Warning: the photo of Pleo playing tug of war is mercilessly cute!

First, a picture of Pleo walking away (click to see it full size): 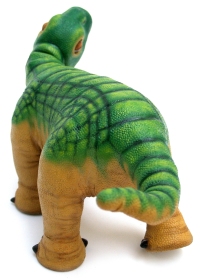 Next, here's Pleo with a view from above (click to see it full size): 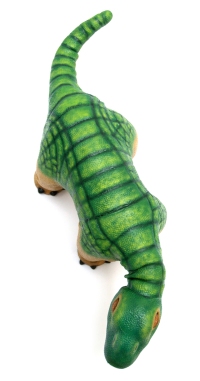 Finally, here's the tug of war photo I warned you about (click to see it full size):

In a previous post I talked about Make magazine's terrific coverage of Ugobe, Caleb Chung, and Pleo. One of the points made by the article about Caleb is easily the most revealing glimpse into a man who is destined to go down into history as the real life Geppetto of our time. (Geppetto was a lonely woodcarver who brought Pinocchio, a marionette in the shape of a small boy, to life in one of the most beloved fairy tale classics of all time.) The point the article made is that Caleb is doing this for passion, not profit. Caleb's previous creation, the Furby, made Caleb a wealthy man. He doesn’t have to work another day in his life. But a man like him is incapable of sitting still.

I have not had the honor to meet Caleb, but I can’t help but believe that there is at least one feeling we do share. When I was a kid I used to dream about a gold coin that I wanted so very, very badly. I vowed that I would somehow bring that coin out of my dreams and into real life. I would wake up with my hands tightly clutched underneath my blanket, sadly squeezing only empty air instead of the coin I so passionately wanted.

I believe Pleo is Caleb’s gold coin. The difference is that he has the talent and the resources to make his dream real. I can almost see him up late at night, taunted and teased by a playful perfect Pleo that lives in his mind, and pushes him relentlessly to please make him (or her) real. If you ever wonder why I have such confidence in Ugobe to deliver, then make sure you read that Make magazine article. If for no other reason, then to see a hilarious photo of Caleb hamming it up for the camera with a cuddly Pleo popping out of his shirt in the style of the movie Alien.

Dream a little dream of Pleo

I’m going to end this blog post with a small dream I had about Pleo. Nothing significant, just a little flight of fancy I had during slumber that I believe will come true. I was in an airplane. All around me were passengers holding their little Pleos. Some Pleos were playing with each other and learning from each other. Other Pleo’s were sleeping peacefully in their owner’s arms while occasionally the sound of a tiny Pleo sneeze could be heard from a far corner of the plane.

At the end of the dream, the last thing I heard was the stewardess speaking over the microphone: “Attention passengers. We are approaching our destination. Please put your Pleo’s in an upright position and stroke them gently to keep them calm during landing. Thank You.”

A quick post over the weekend about new sightings of Pleo in the press.

1) Ugobe made a stop to the offices of Red Herring, the magazine, who has now posted an article with several new (adorable) photos of Pleo.

2) Notcot has an article of Pleo, also with photos, and the first screenshot of Pleo's personality modification software I have ever seen!

3) Make magazine, the powerhouse publication for hardware hackers, has a fantastic article on Ugobe's Caleb Chung and Pleo. I learned a lot of heartwarming and intriguing tidbits about Caleb who once was a mime as part of a comedy team, has done voice overs for live action cartoon shows, and some interesting and honest facts about his engineering brilliance and quirks. There's also a hilarious photo of Pleo popping out of Caleb's chest "Alien" style. This issue, volume 8, will be on newstands by November 20, 2006 and is a must read for any Pleo enthusiast. Subscribers to the digitial edition can read the article online now.

"When you leave for work in the morning, your dog doesn't sit by the door all day. He explores: he does stuff. Pleo will be doing something when you're gone because he's alive."
This is a post about Pleo, UGOBE's robot dinosaur and Pleo's inventor Caleb Chung
permanent link to this post posted by roschler @ 12:13 AM 0 comments links to this post 

GearLive - Pleo can catch a cold!

Just a quick update post for the weekend. GearLive has a short write-up about the Pleo. They mention that when Pleos meet they can interact in interesting ways. In fact, a Pleo can even catch a cold from another Pleo! Don't worry. I'm sure this isn't a real cold that could hurt Pleo in any real way. Just a bit of fun to add to the expressiveness of the little dino.

Pleo Makes A Return Visit To The SciFi Channel!

The site belonging to the wonderful SciFi TV channel, the channel that brings you award winning fantastic shows like Battlestar Galactica, was visited by Pleo recently. They did a full write-up on the Pleo and there are some videos which you won't want to miss. After you've read it, go on to part II of their coverage to read more about, and see an even juicier video of the Pleo.

I don't think anyone would begin to question for a moment the burning passion of inventor Caleb Chung to finally make his dream come true, a dream that his best-selling Furby creation could only hint at due to the state of technology at the time. The dream of creating the first artificial life form. The phrase "artificial life form" is techno speak for "cuddly green lovable pet" that will melt your heart and capture your imagination.

Could Pleo star in his own SciFi channel show soon? I don't know about you, but I'll be watching the SciFi channel very closely for a sneak cameo appearance by Pleo!

Stunning news! Pleo has been named as one of the Best Inventions of 2006 by Time, Inc. Momentum for the little green charmer is building at a rapid pace!

This is a new post for Pleo, UGOBE's robot dinosaur

Wherever Ugobe's Pleo goes, the little baby dino never fails to impress. It looks like Pleo has already charmed noted PC Magazine toy and gadget editor Lance Ulanoff. He liked Pleo so much he wrote a post for GearLog that then refers readers to his full write-up on PC Magazine.

(Editor's note: Lance Ulanoff actually oversees all product and review coverage for PC Magazine and PCMag.com so this is a big news event. Also, the PC Magazine review has links to FRESH NEW VIDEOS and pictures!)

I won't go into depth here on the articles, Lance is a top notch writer and does his usual thorough and entertaining job of describing Pleo the robot dinosaur. However, I can't resist highlighting two quotes, one from each article, and giving you an updated feature list (see below).

"I can honestly say that I haven't been this excited about a product demo since Sony brought in the first AIBO."

From the full PC Magazine article, and to date, my favorite quote so far:

"During the meeting, Pleo walked, made sounds, pretended to be scared, faked a limp, responded to its name, and batted its baby blue eyes."

It's going to be an excruciatingly tough few months as we wait for Pleo, but it will be worth it!

Got a question about Pleo? Enter it below and press Search