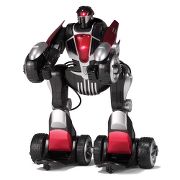 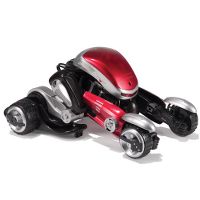 Forget those stale transformers action figures, now you can have the real thing. Hammacher Schlemmer has added the The Transforming Remote Controlled Robot Car to their inventory. This remote controlled robot car can transform from a car, into a truck, and finally into a robot that rolls on only two wheels instead of four. With an expected ship date of 10/10/2008, the robot should be hitting US shores any day now. The robot car will run for up to 30 minutes on a full charge of its rechargeable battery. Recharging the battery takes approximately four hours. It has a range of 100 feet from the remote control which requires a single 9 volt battery. If Optimus Prime had a little brother, this would be him. Click here to learn more about this amazing transforming robot car. 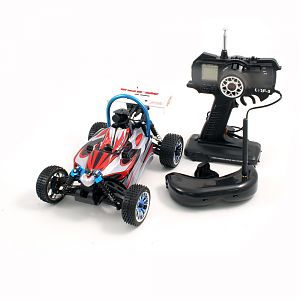 This many not be the flying car of the future we are all waiting for but it certainly is a gadget out of the same futuristic movie that promised it! The VTS Camera car is a remote controlled toy racing car that has a camera in the driver's seat. Here's where it gets exciting.

The camera in the driver's seat transmits images to you so you can see everything the car sees. The camera also moves left and right, up and down so you can look around while doing your remote viewing. But here's the mind blowing part that would even make 007 (James Bond) jealous!

The car comes with a futuristic visor that has motion sensors. When you move your head up and down, left and right, the camera in the car follows your movements! It's an amazing real life example of mobile virtual reality and perhaps the most amazing example that a consumer can actually buy.

Having said that, it's time for a reality check. This fantastic little car is expensive. Is it worth every penny? Yes. Are most of us going to be able to afford it. Probably not. At £599 which is $1112 USD it's not cheap, but if you have the bucks, go for it! Watch the video below which is shot from the perspective of the car when it's in operation. Click here to buy the VTS Camera Car at Red5.